A perfect hotel to enjoy the best of Florence

The Hotel Atlantic Palace is centrally and conveniently located for both the Palazzo dei Congressi and Palazzo degli Affari; it is also just a short distance from the Duomo, Santa Maria Novella, San Lorenzo and the city’s most prominent points of interest.
Just a short walk from the hotel, a mere 50 metres, in Via Faenza 42 is the Cenacolo of the Fuligno Conservatory, with the famous fresco by Perugino and other works by Bicci di Lorenzo.

Five minutes on foot takes us to the characteristic covered marketplace of Piazza San Lorenzo – today the site of international cultural events. This is one of Florence’s most authentic spaces, featuring an incredible wrought-iron and glass liberty structure that hosts fruit and vegetable stalls and shops offering typical Tuscan products, as well as bars and small, cosy historic restaurants.

The Basilica di San Lorenzo is just a short distance from here; it was once the parish of the Medici family, who saw to embellishing it over the centuries with the works of the most renowned artists of the Florentine renaissance: Brunelleschi and Donatello, and then Michelangelo, who created one of the most famous artworks of all time here: the New Sacristy – which houses the Tombs of the Princes within a prestigious architectural and sculptural complex.

Exiting the Basilica, the imposing Palazzo Medici Riccardi is at our left; it conserves the fresco of the Journey of the Magi by Benozzo Gozzoli, and today hosts important temporary exhibits. Continue along Via de’ Martelli to Piazza del Duomo, with the Church of Santa Maria del Fiore, the Giotto Bell Tower and the Baptistery of San Giovanni. The three buildings feature a colourful display of marble and are dominated by the imposing and unmistakable red cupola of Brunelleschi.

Take a break at one of the historic cafés in Piazza della Repubblica (such as Gilli or Paszkowski), then go for some shopping on Via de’ Calzaiuoli and Via de’ Tornabuoni, Florence’s trendiest street, which features shops and showrooms from the most prominent Italian and international designers, such as Ferragamo, Gucci, Prada, Cartier, Dior, Cavalli, etc.
We then turn back towards the Hotel Atlantic Palace after a visit to the Church of Santa Maria Novella. Here too, the two-toned marble displays the refined balance of its façade, the work of yet another great genius of the Florentine renaissance: Leon Battista Alberti.

The Hotel Atlantic Palace is also an ideal place to stay for business travellers: the Palazzo degli Affari and Palazzo dei Congressi, the site of important international medical conventions and prominent events, are just a short 5 minute walk away. A little further on, the Fortezza da Basso is the site of numerous exhibits, trade fairs and events such as &quot;Pitti Uomo&quot;, the renowned men’s fashion fair, &quot;Pitti Bimbo&quot; and &quot;Pitti Filati&quot;, events that bring thousands of visitors from around the globe to Florence every year. 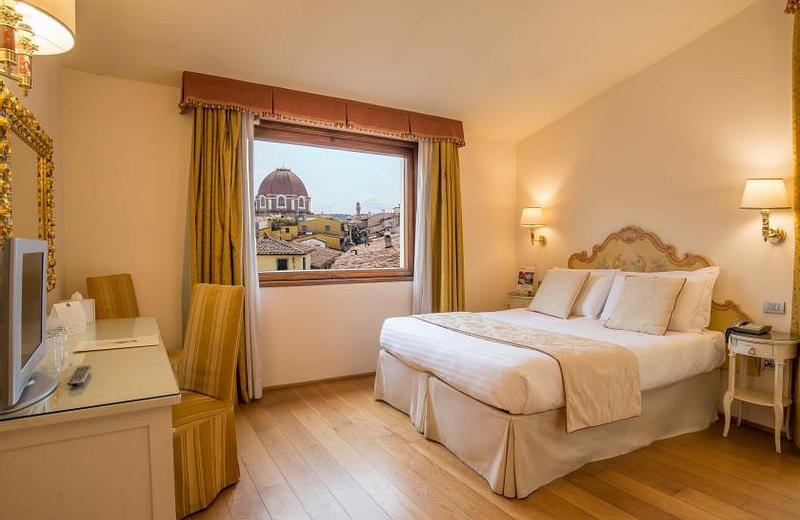 Book on our Official Web Site!

Discover your benefits:
from €55
Book now

If required, Italian Breakfast will be served in your room
See more

Room with a view

A superbe view from our superior room
See more